I like to describe myself as a rocks, rust, roots, and relics photographer. I’m old enough now that if I were furniture, I’d be mid-century modern. I’ve moved to digital photography from a background in large format black and white film. Of late, I’ve been most intrigued by the works of the 19th- and early-20th-century photographers in the west, including Carleton Watkins and William Henry Jackson, whose photographs were instrumental in the formation of our first national parks. 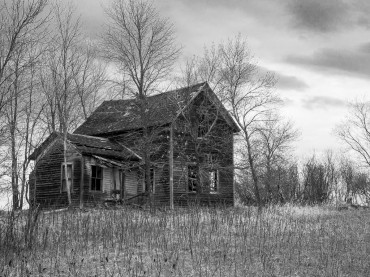 An abandoned farm house in the upper Midwest. This photo was made with a Canon 5D mark II, with a canon 24-105mm lens. Converted to black and white using Adobe Lightroom software on an iMac.