One of my few redeeming qualities is that I never take a beautiful day for granted. Two noble and gratifying goals, signals of a life well-lived, are the discovery of beauty in the sciences, and creation of beauty in the arts. Beauty in nature occurs everywhere, urban and rural, because light, matter, and their interaction, are natural, inherently beautiful and awe-inspiring.  Let there be light!

FDR Drive / Homage to the Photon 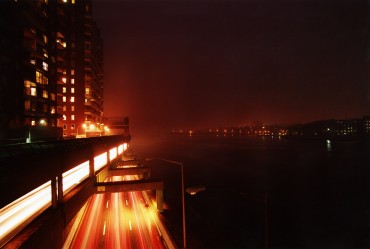 Built in segments over a period of years commencing in 1934, the drive is a parkway, originally named the East River Drive, and renamed posthumously for President Franklin Delano Roosevelt. It stretches over 9 miles along the eastern shore of the New York City borough of Manhattan island. The drive tempts motorists with numerous gaze-worthy distractions, including the Brooklyn, Manhattan, Williamsburg, Queensboro, Robert F. Kennedy (aka Triborough), and Hell's Gate bridges, the United Nations, and diverse neighborhoods so drivers keep your eyes on the road! Urban hikers can enjoy a long walk on the esplanade at various points. History buffs note that a stretch of the drive gently protruding north of 25t street is built on rubble from the city of Bristol in the United Kingdom, which was heavily bombed by the Luftwaffe. US and Canadian Transport ships bringing military supplies were loaded with the rubble to provide ballast for the return trip. The Bristol Basin commemorative plaque honors the heroic citizens of Bristol.