This piece is from a photograph that I took of Mount Jefferson after a storm while my cousin and I were visiting my aunt. I dropped my camera lens cap and it fell about 20 feet down a cliff. I insisted on climbing down to retrieve the lens cap (that probably would have cost all of $5 to replace). My cousin, Kurt was nearly unsuccessful in talking me out of this until he stated, very calmly, “Patty, there are snakes.“ I immediately turned around and started towards our aunt’s house and stated to Kurt, “I wonder if the beer we brought is cold. Let’s go see.” 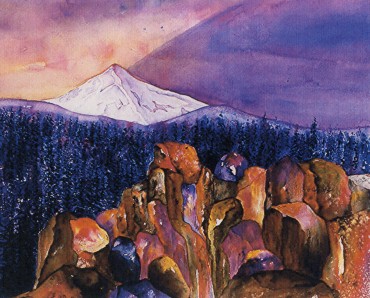 Mount Jefferson in the Central Cascades in Central Oregon after a storm.